One minute a little boy is playing outside his foster nana's house, the next minute, he's gone. How can a three year old child simply disappear?

By our own best-selling author and Walkley Award-winning journalist, Caroline Overington, Missing William Tyrrell is a moving and compelling exploration of one of Australia's most baffling and heartbreaking mysteries.

The Model Wife by Tricia Stringer

Even a good woman can be pushed too far...

Natalie King's life is full. Some might say too full. With her teaching job, a farm to run, three grown daughters who have not quite got a handle on things, a reserved husband and a demanding mother-in-law, most days she is too busy to think about whether she is happy. But her life has meaning, doesn't it? After all, she is the one person everyone depends upon.

The Shining Girls by Lauren Beukes

The girl who wouldn't die ... hunting a killer who shouldn't exist.

In Depression-era Chicago, Harper Curtis finds a key to a house that opens on to other times. But it comes at a cost. He has to kill the shining girls: bright young women, burning with potential... 'strong contender for the role of this summer's universal beach read ... loaded with acrobatic twists' New York times

Just One Wish by Rachael Johns

Alice has always been a trailblazer as a scientist, activist and mother. She knew her choices would involve sacrifices, but now, on the eve of her eightieth birthday, she's beginning to wonder if she's sacrificed too much.

Alice's daughter, Sappho, rebelled against her unconventional upbringing, choosing to marry young and embrace life as a homemaker, but her status as a domestic goddess has recently taken a surprising turn.

The Forbidden Door by Dean Koontz

The cracking new thriller from No.1 New York Times bestseller Dean Koontz. If you like Jack Reacher or Jason Bourne, you will love rogue FBI agent Jane Hawk.

Rogue FBI agent Jane Hawk is on the trail of the members of a murderous organization who drove her husband - and scores of other fine individuals - to commit suicide for no explicable reason.

After discovering their plan to subjugate the world by means of an insidious new technology, she has been hunting them down one by one. Now she is America's most wanted fugitive, and the organization is closing in on her beloved five-year-old son, whom she sent into protective hiding with her dearest friends.

Limit one redemption per eligible member. Limited to first 10,000 each month. Offer of books featured ends 31 October 2020 or while stocks last. Provided you remain a member. Member must register with Kobo to take up this offer. 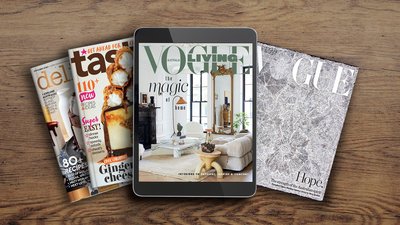